From Bagan to Mandalay it takes only half an hour to fly. Another 35km are to drive from the airport into Mandalay town centre / hotel. The taxi charges us 12.000 Kyats, approx. 10 USD, for the distance. 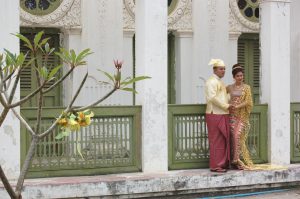 A bridal pair in the royal Palace

Mann Yadanarpon Airlines belong to the newer airline companies with relatively new fleet of aircrafts. We meet almost only foreign tourists in the plane and Mann Yadanarpon appear to be safe and reliable. So we prefer to fly with them. 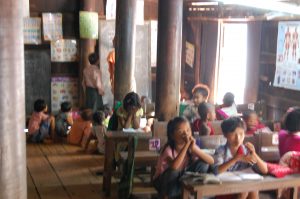 Arrived early in Mandalay, the first thing for us to do is to book flight and accomodation for the next stop in Inle lake. Fortunately, two doors further next to our hotel there is a small travel agency. Domestic flights are so easy to obtain, you can book for the same day flight without having to pay an exorbitant fare therefor. Accomodation over the own internet in hotel. Now we are ready for Mandalay!

Kuthodaw Pagoda at the foot of Mandalay Hill. On its ground there is the largest book of the world: 729 pages of the entire Pali cannon, about the life and teachings of Buddha

With 1,6 million inhabitants it is the second largest city of Myanmar. The cultural and economic centre in the north of the country. For only 28 years it has been the Burmese capital in the mid-19th century until the last Burmese King surrendered to the British troops without any major resistance.
The royal family was brought by the British into exile in India. With them the last Burmese kingdom has ceased to exist. 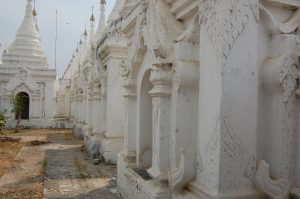 For each of the 729 pages of the Pali cannon there is an marble slab with inscriptions on both sides, standing beneath an own white Stupa

Our first day in Mandalay is uneventful: Long afternoon sleep, exploring the surroundings in the early evening. Our hotel is just two blocks away from Mandalay main train station. Dinner from a Chinese restaurant which is rewarded as best restaurant for its noodle in town. This is confirmed and suggested to us by our guide for the day tour later on. We just find it by chance as it is only 500m away from our hotel. And it does earn its reputation! Then a boring night market few streets further, to end a long day. 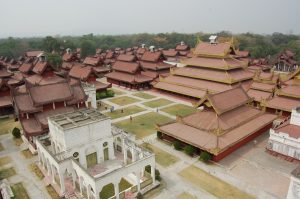 The royal palace, almost completely destroyed in World War II, rebuilt in the 1990s. View from the Watch Tower

Next morning we get three bicycles lent by our hotel for free of charge. We ride to the foot of Mandalay hill and to the royal palace nearby.
One original building of the royal palace has survived the bombing destruction: The former residence of King Mindon Min, originally constructed in Amarapura, then moved to Mandalay as the new capital. 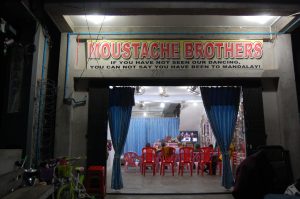 The Moustache Brothers, a comedic trio, critics to the Burmese military regime, one has died after years of detention

Just before his death, his son and the last King of the Monarchy, Thibaw Min, has relocated the whole building outside the palace wall believing the building is haunted by his father‘s spirit. It was donated and becomes the Shwenandaw monastery at the foot of the Mandalay hill. It gives you an impression how the rest of the palace could have looked like as the restoration of today buildings within the palace wall is not as majestic as their originals. 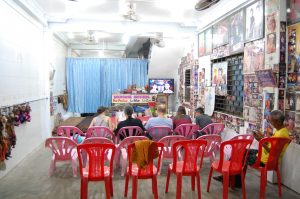 There is a performance daily at 8:30 pm at their home, seven days a week. Only for foreigners. Burmese not permitted

In the evening we attend the Moustache Brothers show, ten minutes drive by taxi. Greeted with hand shake by Lu Maw himself the performance takes place for six spectators: a couple from Spain, an American and three of us. We feel touched and humble by their warm welcome with their background story. 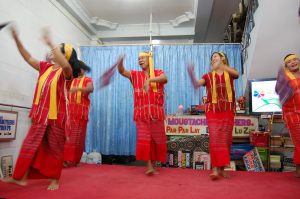 Slapsticks, satires and classic Burmese dance are parts of the evening program, performed by many family members of the brothers 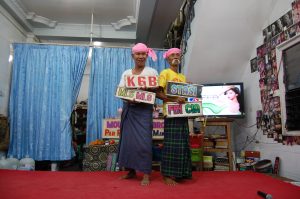