Flight from Chengdu to Xi´an is straight forward. Taxi from hotel to the airport for 60 Yuan (8 Euro). Airport shuttle bus from Xi´an Airport to Xi´an railway station for 15 Yuan. Two Metro stations to Beidajie (North street) for 2 Yuan. And another 5 minnutes walk to my hotel. 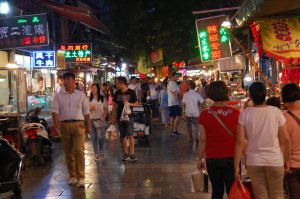 Busy Moslem district right in the heart of the ancient wall, at the Drum Tower

Formerly known as Chang´an (= Eternal Peace), one of the oldest city of China, Xi´an (= Western Peace) has been the Chinese capital for over 11 centuries for many dynasties and the starting point of the Silk Road. 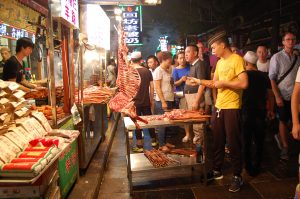 At night the quarter is overcrowded by visitors. Restaurants and food stalls offer all sorts of islamic chinese Food

It was the first capital of the unified Chinese empire under the Qin dynasty (221-206 BCE). Its first emperor Qin Shi Huang ordered the construction of the Terracotta army and his Mausoleum outside Xi´an shortly after his ascension to the throne.

The manufacture of sweets is demonstrated: Long trundle of white sugar fibers is kneaded repeatedly

Today Xi´an is a bubbling and modern Metropolis of 4 million inhabitants. Most of them are Han-Chinese. There are other ethnics like the Hui, descendants of Silk Road travellers, diplomates, merchants etc. who have settled down and intermarried with local people. They maintain their islamic religion until present time and form a strong community. 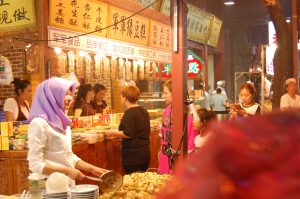 Moslemic women wear a scarf, men a white cap. They are descendants of Silk road travellers 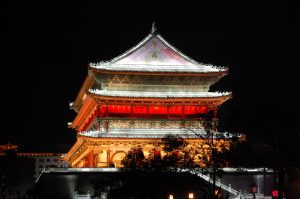 According to the inscriptions on the steles which are well preserved until present day the Great Mosque was constructed in 742 AD during the Tang Dynasty and repaired several times by imperial orders. 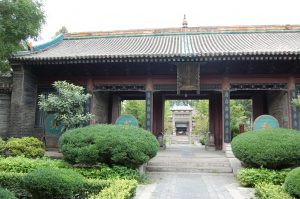 The Great Mosque in the centre of the Moslem district

It has various artefacts from ancient time, among them the invaluable handritten copy of the Holy Koran from the Ming and the Mecca city plan from the Qing period. 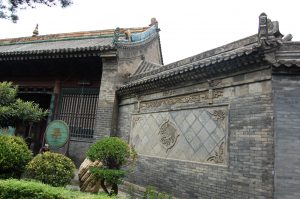 A mixture of chinese and oriental architectural Elements 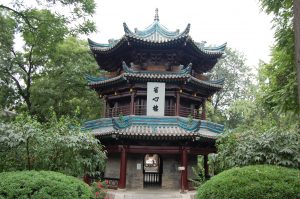 An oasis of tranqillity. Here the minaret

In the Prayer hall the ceiling has over 600 carvings of classical scripture in decorative patterns. And the walls are filled by carved inscription of the entire Holy Koran in Arabic making up 600 wooden boards and 30 of which are in Chinese. 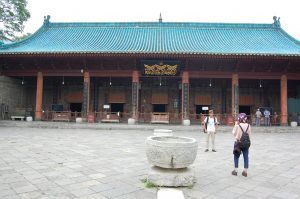 Prayer hall only accessible for Moslems 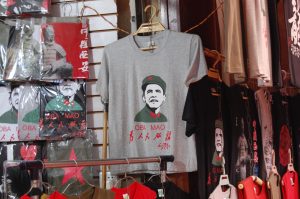 Plenty of souvenir shops around the Great Mosque. A new star in the chinese sky: Oba Mao! 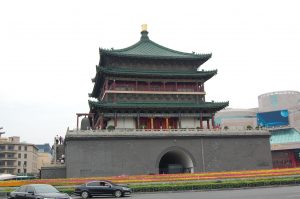 The Bell Tower, town centre, not far away from the Drum Tower

At the South gate of the City wall, close to the Beilin museum there was the Guanzhong academy, set up at the end of the 16th century by the scholar Fong Congwu, famous at his time and well known for the training of students. 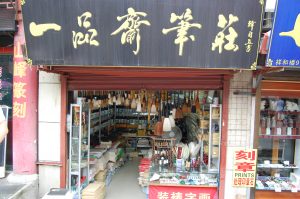 Inside the City wall east of the South gate: A quarter of calligraphy material suppliers

Now it is the premise of the Xi´an Normal University. The quarter surrounding it has become a market for calligraphy materials and calligraphy art and paintings. 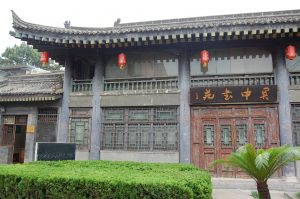 Beilin: The forest of steles. Dated back to 1087 it has a collection of more than 4.000 steles from the Han Dynasty to the mordern time. Calligraphies and textes inscribed on steles over the years enable the study of the evolution of the art of calligraphy and other cultural values of the writings. 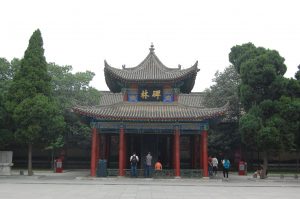 The technique of ink rubbing / stone rubbing at the beginning of the 7th century and perhaps earlier used by Chinese makes it possible to multiplicate the inscribed records onto paper. 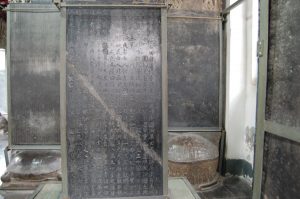 Rubbings have been objects of collection for chinese scholars and connoisseurs over thousand years. In many cases it is paper, usually thought of as a fragile medium, that preserves unique copies of the inscriptions. 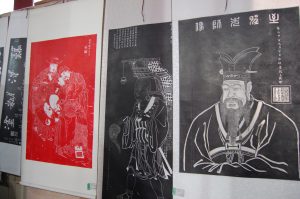 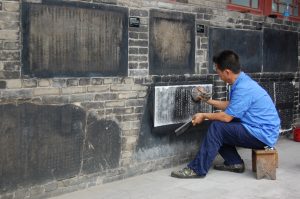 After the educative visits to the Great Mosque and the Beilin Museum it is time for some physical exercise: Cycling on top the ancient City wall. Built initially during the old Tang Dynasty (618-907) the wall was enlarged and renewed by Zhu Yuanzhang, the first Emperor of the Ming Dynasty (1368-1644). 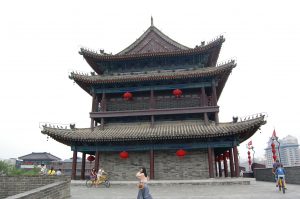 The wall is 12 m tall, 15 to 18 m at base and has a circumference of 13,7 km on top. You can walk, drive by electric car or rent a bike from one of the rental stations situated around the top of the wall, 45 Yuan for two hours. It takes me one and half hour to circle the crown by bike. 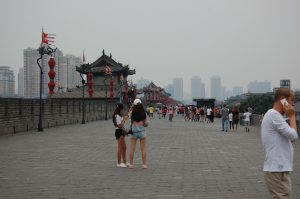 Re-constructed in the 14th century the world largest and well preserved city wall of Xi´an. On top it is 12 m wide 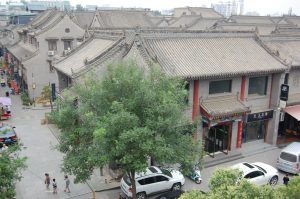 View from the city wall 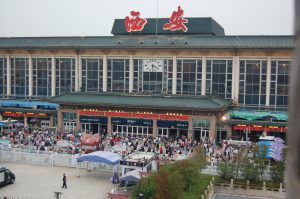 Xi´an railway station, one of the many long-distance stations of the city 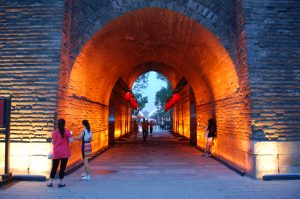