“798” quarter. Known to any taxi driver, originally the number of one manufacturing building in a large complex of heavy industries, designed and set up with support of Russian and East German engineers in the fifties of the last century.

In later years it was not in used and left for decay. Many artists and Bohemians moved in and transformed the whole area into a modern art and cultural scene of Beijing.

Worth a quiet half day out with dining. Nearly every second store is an art gallery, publishing firm or design studio beside cafés and restaurants. Ai Wei Wei used to live here.

Take the taxi outside the subway station Sanyuanqiao, show the driver number 798, he will take you there for 21 Yuan (by taximeter switched on). Approx. 3 Euro. 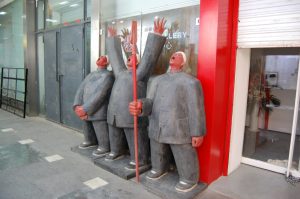 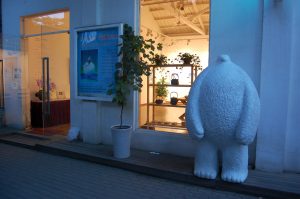